On behalf of the Jammu Kashmir Liberation Front and its supporters, I am writing to urge both of you to respect the aspirations of the people of forcibly divided Jammu Kashmir either by withdrawing your troops from Jammu Kashmir or arrange a referendum the way Britain did in relation to Scotland and now its own membership of the European Union.

We expect both of you to show a similar sense of decency, democracy and civilization by providing the people of Jammu Kashmir with a similar opportunity enjoyed by the British people to determine their future democratically and peacefully. This will certainly enhance your credibility among the International Community.

We wish a very good luck to both of you and your respective government and the people.

I am writing on behalf of the Kashmir Liberation Front and hundred and thousand of its supporters in relation to the solution of protracted Issue.

It is unfortunate that we have three governments in three forcibly divided parts of , but neither you nor any of your predecessors tried to reunite your motherland. We urge you to stop appeasing your respective political master and act like a dignified leadership of and , who held referendum to determine their future democratically. was not invaded when she joined  the EU nor was she attacked when she decided to leave the EU. Whereas, was invaded to be engulfed into Pak-Hind Unions. Therefore, we have  much stronger a case than that of and .

We look forward to a positive step by each one of you.

Posted by Tanveer Ahmed at 10:03 PM No comments:

Letter to Chief Secretary AJK - sent by fax at midday 080415

Since the beginning of 2013, the level of communication in terms of internet band-with availability – through every source - has gradually shrunk throughout AJK. The importance of communication provision – in all its forms – cannot be overstated in this age where globally; communications, politics and society are interacting in a manner never witnessed before. Given the scope for improved governance, education and particularly in the context of the State of Jammu & Kashmir’s unresolved ‘national question’; the citizens of AJK are being deprived of the most important tool to equip themselves for exercising their right to self-determination.

As the State of Pakistan’s consistent public stance since its creation in 1947 has been to declare its  support for Kashmiri’s right to self-determination, the current level of internet band-with available to the citizens of AJK is - with due respect - contrary to that stance. From a public interest perspective, opinion on the ground suggests that this scenario is intolerable.

The de-facto relationship between the State of Pakistan and the State of AJK appears to trace its origins from the Karachi Agreement signed on the 28th of April 1949, whereby practically all matters of public policy in AJK and Gilgit Baltistan were handed over to Pakistan. Hence, this letter being addressed to Pakistan’s top-most civil servant in AJK.

In consultation with the citizens of AJK, who wholly fund the initiative leading to this letter, we would suggest that the provision of internet band-with in AJK be increased to a minimum level of whatever constitutes average global band-with availability, by the 31st of July 2015. If such a level is not achievable for whatever reason, that would provide sufficient grounds for our citizens to engage with the outside world - for our communication needs on our own initiative - without obstruction or interference from the State of Pakistan.

Your written response on this matter is eagerly sought by the public of AJK.

Written in sincerity to public interest

00006/070415/KA
Written  by Tanveer Ahmed – an aspiring technocrat claiming to be assisting in the formation of J & K's first genuine public agency, in Azad Jammu and Kashmir.
Contact: 03455044252
Email: sahaafi@gmail.com

Posted by Tanveer Ahmed at 3:38 PM No comments: 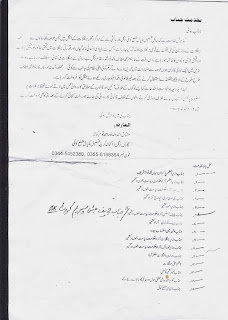 Posted by Tanveer Ahmed at 7:48 AM No comments:

From Kashmir to Turkey


Kashmiri columnist, analyist and reformist; Quayyum Raja, who is touring Turkey, has met with the Chairman of TUMSIAD (All Turkısh Industrialists Association) Dr. Hasan Sert and hıs team at it's Istanbul headquarters. Commentıng on the meetıng and hıs observatıons, Mr. Raja said the most remarkable and impressıve aspect of Turkey's rapid economıc development is the fact that it has emerged as a result of hard work by the Turkish people in general and it's experts in particular, rather than exploitatıon like Western powers. He said he found the Turkısh people as friendliest as ever imagined. The full report of Mr. Raja's visit will be published on his return from Turkey to Azad Jammu and Kashmir at the earliest.

Posted by Tanveer Ahmed at 8:57 AM No comments:

Trouble brews in Gilgit-Baltistan: Baba Jan Hunzai’s tale – The Express Tribune
Posted by Tanveer Ahmed at 7:41 AM No comments:

Imagining Switzerland in Kashmir at the Hague (1999)